I visited Vermont for Veteran’s Day weekend for the first time in my life.  As a young professional and an avid nature lover, I thought a one-night stay in Stowe followed by two days in Burlington would be enough to gain a sense of the culture and lifestyles of Vermonters.

My experience was very satisfying on the environmental front. Vermont is like a big campground. There are so many pine trees, rolling hills, mountains, farmlands and trails. The air is so pure, clean, and fresh from the mountains. The residents must feel so blessed and thankful for the serenity and wildlife here.  The snowfall on Friday night up to Stowe was a beautiful sight to see, almost angelic, as it lightly dusted the roads, the treetops and at the Von Trapp Family Lodge.

What’s behind all this beauty in Vermont? What don’t we know about the trials and tribulations of the farmers here? How are they coping?

From what I know talking to locals, the long-time Vermonters are resilient.  In the 1960s, the hippies from New York City came here in light of organic farming. They were fed up with pollution and chemicals. Today there is still this air of conservation and protectionism of the land. In the early days, Vermonters pushed back federal highways — until the government forced them into the construction.

Nowadays, residents are pushing back residential buildings and business development in the biggest city, Burlington.   I saw a parade of protesters marching down Church Street Marketplace with banners and signs calling for an end to capitalism.  Most of the residents live in rural areas, nestled in valleys and surrounds by beautiful rolling hills. I’m sad to hear from fellow flight passengers that dairy farmers are dwindling here. They can’t compete with the “big dairy farmers” out West. There is also a problem of some family farms are friends with the Vermont Land Trust and have more power and control of land ownership…for example what’s happening with the Bread & Butter Farm.  There are “land wars” in Vermont from what I read in the local Seven Days newspaper.

Outside of farming, it looks as if the trade and technology sector is trying to ignite. Vermont Works for Women, a non-profit organization, is dedicated to help girls and women receive vocational training opportunities, hands-on training in technical skills, and workshops on building self-esteem, among many other employment advancements.

As for the people and economic situation, I was concerned to hear the lack of good-paying jobs and population drain. I also read in the job classifieds a dire need for nurses, clinicians, psychotherapists, and counseling services specifically for at-risk youth and shelters. There was also a fascinating job called “mobile home resident coordinators” where they check in on the health and habitat of the people. What’s going on with mental wellness here?

I watched as local youth in Burlington stay glued to their smartphones, drinking alcohol, stuffing themselves with Ben & Jerry’s ice cream, and enjoying their cannabis shops. I don’t know if young people really see a career in what’s in our food and environmental conservation.

Then, there are the middle age residents who are concerned about their schools and taxes. Out in Marin County, San Francisco, there’s a private foundation which residents pay to support the local schools.  Meanwhile in Vermont,  little and well-loved elementary schools are closing down because there are no families.  Some schools few students and teachers.  Schools are merging together and some students will take an hour long bus ride to get to school. Such a disparity between Marin County and the counties in Vermont! The mergers are all part of Act 46.  The State School Board of Education has a legislation which mandates 37 school districts merge with other schools to help offset school debts.

I feel like all children should have equal access to education and the same quality of learning. I feel the U.S. education system is going further downhill. Now, families are trying to avoid paying state school property tax. Who will pay for the schools? The technocrats! In the future, they’ll take over how curriculum is run, probably by algorithms and little human intervention, and students will be clustered in “aptitude” groups at an early age.  All this going on while rich capitalists are flying to their next business destinations. Money makes the world go around!

What Burlington needs is a delicate, sensitive balance between capitalism and conservation. The restaurants in downtown Burlington were packed Friday to Sunday and heard wait lists were going as long as a 1 hour duration! Just for me to get one seat so I can order a plate of gingerbread pancakes at Penny Cluse restaurant, all before 9am on Sunday morning, was a 30 minute wait.  Most residents live in rural town with nothing to do. So,  the residents depend on downtown Burlington for activities.  How does Burlington make the area viable, while at the same time, being conscious of preserving Lake Champlain and the ecosystem surround the lake?

On the other hand, Stowe has the power to attract small businesses because of places like the Von Trapp Family Lodge and Green Mountain Inn. I am excited to see what possibilities can lie head for residents and visitors.  I met a maple syrup farmer in Stowe, who moved here 14 years ago with his wife. They fell in love with the skiing. He looked tired and drained from the harsh winters here, and he said he was missing tuna finishing in his home state of New Jersey.  However, after a good hour of the maple syrup tour, he seemed to perk up and have a sense of energy grow from all the families asking questions of the industry. 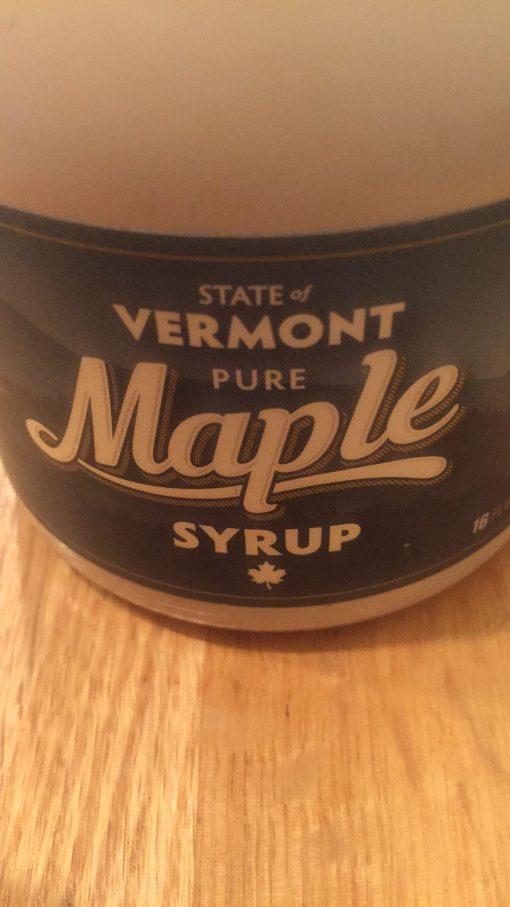 I would be proud too, to do something which is supporting local businesses and a REAL product without artificial ingredients and disgusting corn syrup! Why can’t my state, Pennsylvania, get some Vermont syrup at a comparable price to Aunt Jemima and Log Cabin?  Would it be so popular it’ll fly off the shelves?  In Montreal, there’s a restaurant where customers can “pay it forward” with a meal.  A customer can add extra money to a meal to help cover for someone else’s who can only afford, let’s say $10 for a meal.  Maybe this concept can be used at a grocery store?

Which leads me to my last topic: tourism and marketing. I was so happy to hear Québécois in Stowe and Burlington.  I learned a lot of Quebec residents visit Vermont for shopping and the beaches.  There’s a need for more collaboration between Quebec and its bordering U.S. neighbors.  The last night I was there, I tried Ken’s Pizza and Pub in Burlington. I saw on the menu they had spagetti fume with “smoked meats from Montreal”.   Since I’m moving to Montreal next year, I figured I should give it a try, maybe it’s really good. Well I should of done my homework on Yelp. It was terrible!

At the end of the meal, I visited the City Market Co-op, and clutched onto Fameuse (snow apple) and Keepsake. The Fameuse apples have its origins in Quebec and the Keepsake in Minnesota. I meandered the store comparing cheese prices with local and imported, all the fresh bakery breads with specific delivery date information, the locally produced yogurts from New York and Vermont. Former White House chef said recently at Norwich University “What is the society and culture we want to hand to the next generation?” I pondered his question as I held onto my LOCAL FARM produce.

So, Bernie Sanders, here’s my idea on bringing more people to Vermont! My dream is to build a high-quality farm-to-table restaurant right on the border, half U.S. and half Canadian, so patrons have the full exposure to the silliness of borders. I’d call it the “Open Border” restaurant. Meals would feature signature Quebecois dishes and other foods that represent Canadian and the U.S. heritage. Maybe there can be a friendly tasting rivalry between the maple syrups too? How do I get started? 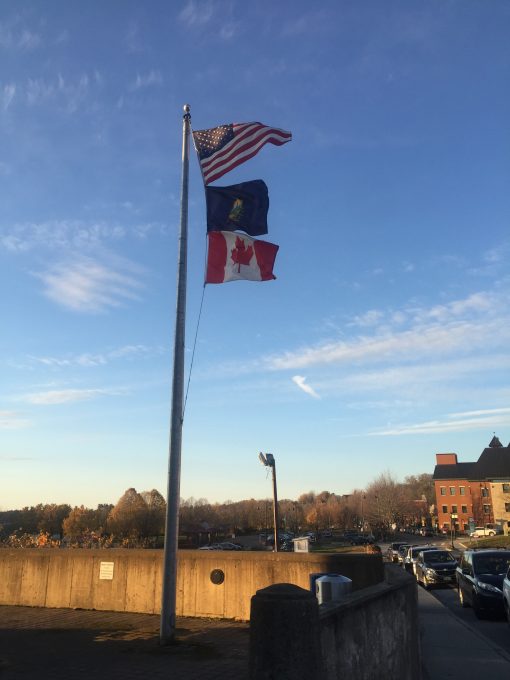