***Update: A representative from the U.S. Embassy in Ottawa said no such database exists of U.S agriculture businesses working in Canada or any agriculture market research.***

Despite Quebec being an partner with France on business and educational activities,  I have found the countries lack any direct foreign investment in the agriculture sector.  Last year, Emmanuel Macron pledged a €5bn “revolution” for French farming.  Is he living up to his word?  How can the two countries work together to create healthy trade and foster a knowledge exchange?

The article started off with a positive growth story on the agriculture sector because of an increase in tractor sales and other farm equipment.  However, later in the report detailing 2011, the economic activity seemed to be quite disturbing, only 1,455 jobs were available in Quebec.
How could this be? Montreal is the second largest city in Canada, with over 1.7 million people. According to the data Montreal-Laval is hardest hit with a negative 28 percent decline in farming. 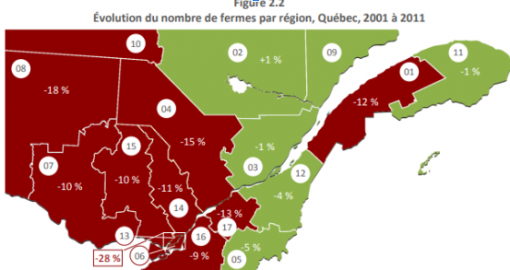 Overall, Quebec’s farming sector is truly on the decline.
What organizations are helping to address the issue?  No one.  I was told Business France would be the right source for more information. I contacted Business France but a young person on the phone directed me to their website and informed me the reports costs 80 euros. What is the secret? Why can’t the general public be informed about this crisis?
So, my question to Macron is what are you doing to bring foreign direct investment to Quebec?   The way things are, Quebec will end up the poorest province in Canada.   As French tech industries continue eating up the market in Quebec, there will be little room for agriculture and “green jobs” to “Make the Planet Great Again”.